An IUI cycle generally bears minimal-to-moderate risk with the most noteworthy concern being the risk associated with delivering twins, triplets, or more. 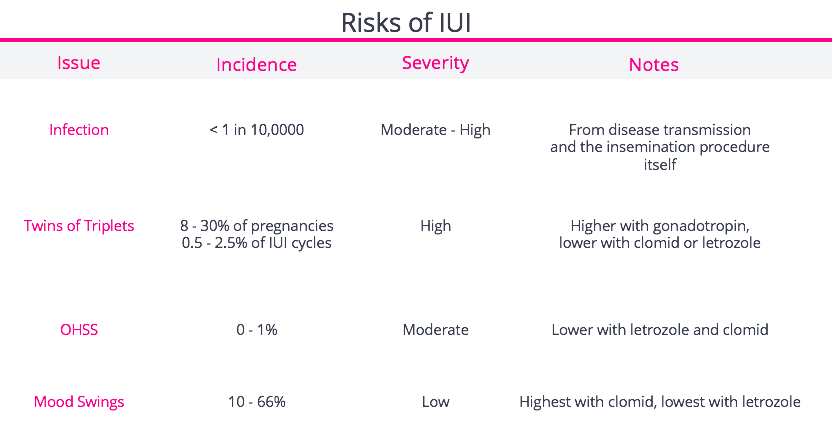 The greatest risk to the patient is the introduction of bacteria or a virus into the uterus which can cause an infection. This can occur in two ways:

According to the best study in the field, over an 18 year period during which 48,000 inseminations with donor sperm were performed, 47 infections were reported culminating in an infection rate of less than 1 per 10,000 IUI cycles.

Twins, Triplets, Or More From IUI

Pregnancies of multiples are the most common and the most severe risk associated with IUI. When IUI is accompanied by clomid or letrozole, 1 - 14% of pregnancies involve multiple gestations. IUI accompanied by gonadotropin records even higher reates. Contrast this to IVF, where the rates can be as low as 1%, or as high as 30%, depending upon how many embryos you and the doctor choose to transfer at any one time.

While most twin pregnancies end with a positive outcome, multiples are associated with an increased risk of nearly all obstetric and neonatal complications.